There are generally a number of inaccuracies and rumors about the defense and security industry. For example, have you noticed how the media basically write about it as about arms industry? And about those who trade its products, at best as arms dealers, at worst as dealers with death? Some journalists and activists may have enjoyed too much the successful film starring Nicolas Cage… Nice story, but the reality is completely different. 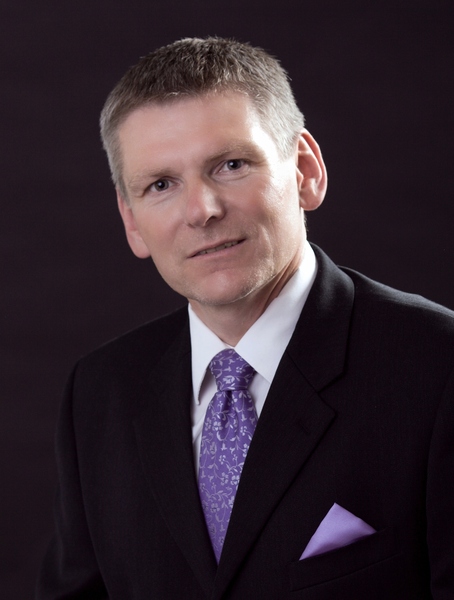 Anyone operating in the defense and security industry knows that weapons make up only a fraction of the production. DSIA (Defense and Security Industry Association, AOBP in Czech) brings together almost 130 companies from the full spectrum of defense and security, and the vast majority of them have nothing to do with weapons. Amon them you will find manufacturers of ground or aviation equipment, electrical engineering, protection against CBRN (chemical, biological, radiological and nuclear weapons) threats, protective equipment for IRS, but also a number of industries related to cyber security, artificial intelligence, or focusing on science, research, development and innovation. 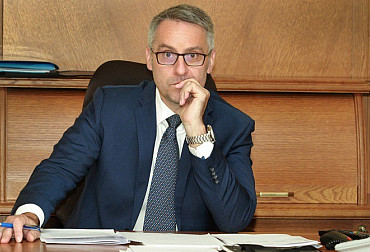 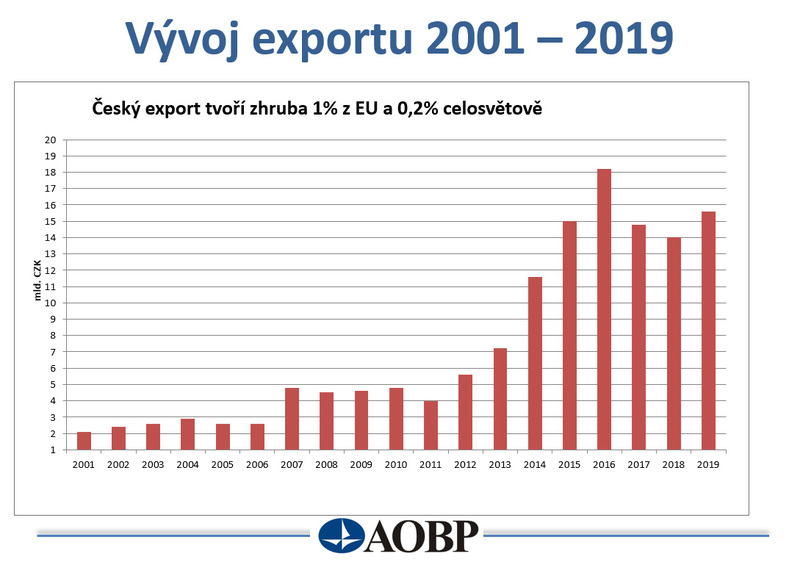 It is the same with exports, which in the case of the defense and security industry account for up to 90 % of production. Let's look at the latest known statistics on Czech exports of the defense and security industry. It shows that the Czech Republic exports to 101 countries, ie to more than half of the world's countries. At the same time, however, the countries in the first twenty places account for almost 80 percent of exports. 75 countries do not achieve even one percent of exports and in total make up only 15 % of exports. 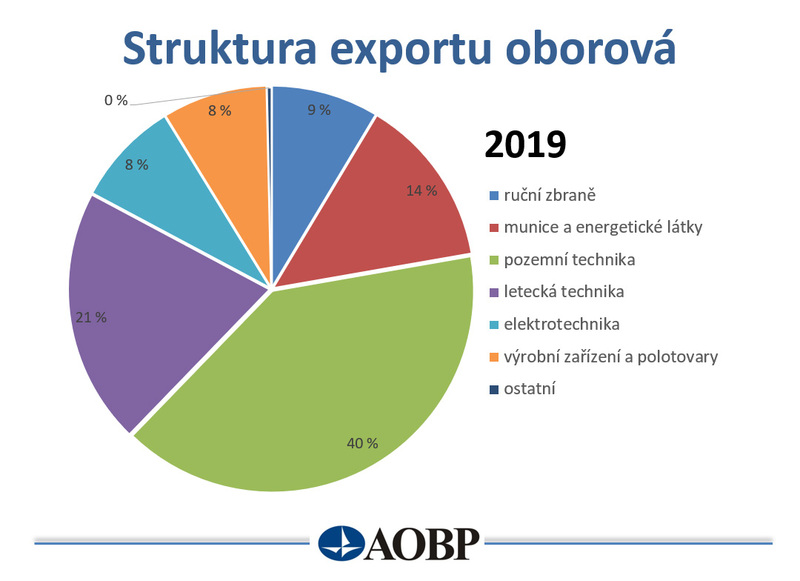 The Licensing Administration, which publishes an annual report on the export of military equipment, distinguishes a number of categories. In the case of the Czech Republic, the largest share of exports of military equipment is ground equipment, as much as 40 %, followed by aircraft, which is 21 %. Only then there are 14 % ammunition and energy substances (mainly gunpowder) and 9 % are small arms. Eight percent are shared by the categories of electrical engineering and the categories of production equipment and semi-finished products. 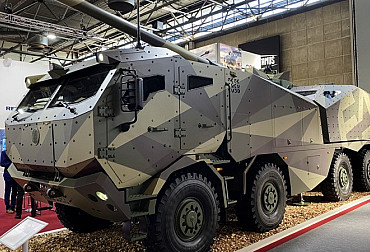 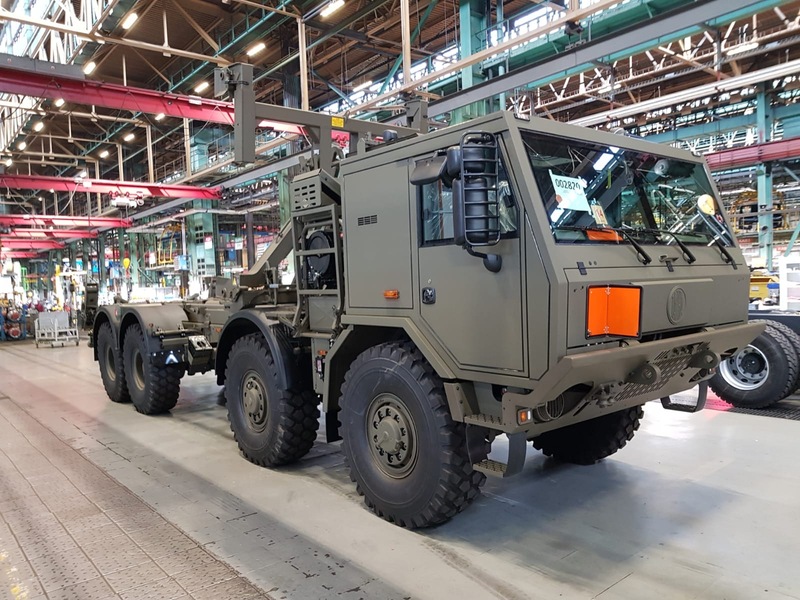 And what about countries? In 2019, we exported the most to Indonesia - less than 14 %. And what goods? In 97 percent, it was ground equipment. The latter were slightly above 10 % in the United States - 85 % of exports covered the categories of aeronautics, electrical engineering and ground technology. Yes, there are also two Middle Eastern monarchies in the top ten, Jordan and Saudi Arabia. 81 % of exports to Jordan are ground equipment. In Saudi Arabia, it is 62 % and another 37 % are production equipment and semi-finished products. Those who understand the issue will understand that it is about trucks and their parts, from which the vehicles are subsequently assembled.

It is a trend of third world countries, which no longer want to be just a market, but want to employ their inhabitants and gradually build their own industry. The V4 countries, Germany, Italy and Nigeria are also in the top ten. According to the regions, we export the most to the countries of the European Union (27 %), then equally to Southeast Asia and the Middle East (16 %). 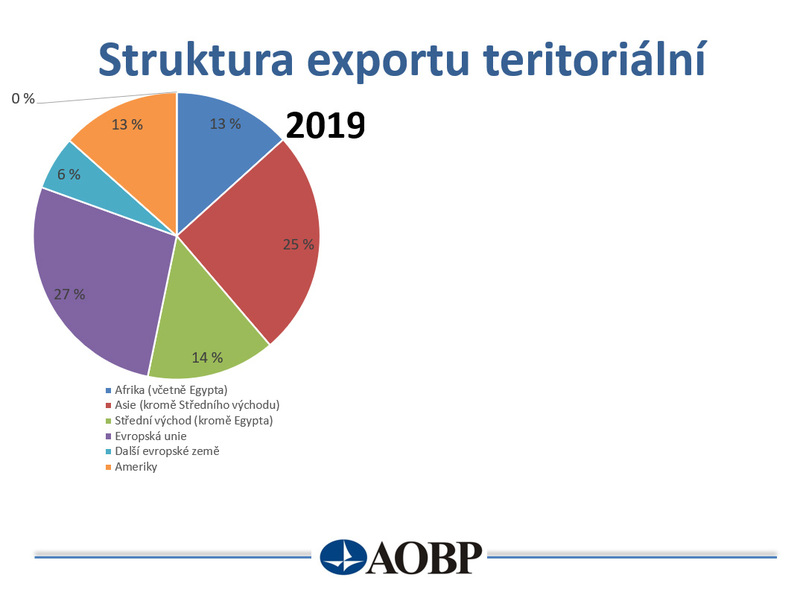 Due to the Vrbětice case, a lot of speculation arose about the export of the Czech defense and security industry, for example regarding the supply of weapons to Ukraine. At the same time, exports to Ukraine have only exceeded one percent since 2013 and are completely negligible and insignificant. And what was imported to Ukraine, for example, in 2019? Ground equipment, aeronautics and electrical engineering. In the Czech media, I also noticed the connection between the Czechia and the base for the export of ammunition. At the same time, it has only reached its maximum 10 % of the total production of the Czech defense and security industry once in the last seven years, but it has mostly been below ten percent.

Journalistic assumptions and stories very often do not correspond to reality. It is one thing if they do not even correspond to the statistics, another may also be ignorance of what is hidden under the statistics. There is a number of areas that do not appear in statistics and tables, so accurate data on their production cannot be captured well and the issue must be understood. These are often so-called dual-use goods (or dual technology) or civilian equipment for force departments. Military categories sometimes include those for civilian use - sports and hunting weapons, binoculars, riflescopes or outdoor equipment. We have been drawing attention to the problematic definition of military material and dual-use goods for a long time.

The pearl can also be a statistical data from the annual report for 2018, when Luxembourg appeared in seventh place in the order of export countries of the Czech defense and security industry. But mere statistics without context will no longer tell you that it was because Capellen, Luxembourg, is home to the NATO-based NSPA headquarters, for which the vast majority of these goods were intended. Equally humorous was the period when our largest exports went to Austria. Pandur wheeled defense vehicles were manufactured in our country, which were exported to Austria, where they were completed and subsequently sold to our Army.

A common feature of the defense industry is that a significant part of its production consists of goods with high added value. In addition, military supplies often generate additional business opportunities for the future. It can be training, education, supply of technologies and spare parts, modernization projects, etc. For this reason, it is difficult to define key exporters and key territories. For example, the export of gunpowder (subcontracted industry) and passive surveillance systems (hi-tech technology) has a different character. Another ranking will come out when comparing the volume of exports and another if we compare the added value.

Perhaps due to frequent watching of TV series, some activists and the media view the defense and security industry very negatively. They seldom operate on facts or intentionally distort them to their advantage. It may be mere vocabulary, but let us not underestimate the power of the word, both written and spoken. Moreover, it is never too far from words to deeds. Let us not look for any problems associated with violence and crime in arms and weapons - the culprits are always people. And to forbid defending the decent against crooks and thugs is a road to hell. 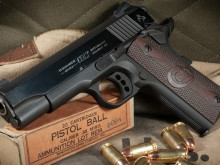 Česká zbrojovka Group SE has Closed on the Acquisition of Colt 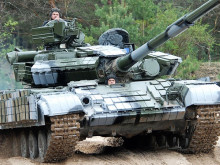 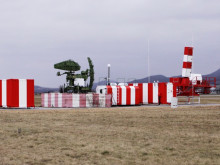