Rheinmetall – The technology group for mobility and security

Rheinmetall AG, publicly listed and based in Düsseldorf, is an international group for leading technologies in the mobility and security segments. Globalization, protectionism, digitalization as well as disruption and transformation in various sectors and industries – especially in the field of mobility – as well as the increasing frequency and intensity of conflicts and military disputes mean that efforts to improve mobility and security are constantly increasing. With its two sectors, Automotive and Defence, Rheinmetall fulfils these basic key needs of modern society.

The Defence sector of the Rheinmetall Group is among the defence and security industry’s leading providers of innovative products for the German and international armed and security forces. Rheinmetall Defence provides system and subsystem solutions as well as a broad portfolio of services for capabilities in the areas of mobility, reconnaissance, command and control, C4I and protection. It also develops customized training and simulation solutions.

As a leading European systems supplier for armed forces technology, Rheinmetall Defence has many years of experience and innovation in armoured vehicles, weapons and ammunition and in the areas of air defence and electronics – including serving the requirements of the navy and air force and for internal security. Whether for requirements specific to different branches of the armed forces or overall requirements, whether for external or internal security, the sector has a wide product portfolio of platforms and components, which are offered as individual and connected system solutions. This makes Rheinmetall Defence a strong and reliable partner to the German armed forces, their allies and friendly armies, along with civil national security forces.

All development, production and service activities are geared towards ensuring the best possible protection for soldiers on deployment. Rheinmetall Defence continuously sets new technological standards here: from vehicle, protection and weapon systems, through infantry equipment and air defence, to the networking of function sequences, electro-optics and simulation.

Protection of people and equipment is the foremost aim of development

The world of the 21st century occasionally faces very tense security situations as well as complex and new threats.

Blurred boundaries between peace and war, military interventions, latent trouble spots, the outbreak of new conflicts, uncontrolled and irregular refugee and migration flows on an unprecedented scale and the consequences of the collapse of state structures in countries in geopolitically sensitive regions call for new answers to the significantly heightened challenges and constant risks associated with external and internal security and new and/or extended and powerful capabilities for international efforts to maintain stability, security and peace.

The range of products and capabilities of Rheinmetall Defence is tailored to central defence technology requirements that result nationally and internationally from many armed forces’ substantial ongoing need for technical modernization and replacements on the one hand and from new military deployment scenarios requiring armies to have an increased ability to react and to take action as well as increased readiness for duty and deployability, for example in order to ensure the security of allies or engage in international peace-keeping missions, on the other.

Rheinmetall Defence’s internal structure is oriented not merely to the needs of the market, but to creating mission-driven capabilities, in turn fostering system-oriented thinking. The company’s innovative strengths are channelled into three specialized divisions, acting in unison to develop the defence solutions of tomorrow:

Rheinmetall is one of Europe's leading suppliers of armoured tracked vehicle systems in all weight classes. Rheinmetall Landsysteme (RLS) GmbH as a major supplier of systems for ground forces develops and manufactures tracked armoured vehicles as well as turret systems. Furthermore, the new Lynx family of infantry fighting vehicle highlights once again Rheinmetall’s role as a high-tech enterprise for security and mobility. RLS is headquartered in Unterluess, with further locations in Kassel and Kiel. This allows an efficient infrastructure with development, design and testing, production, quality assurance, sales, logistics and after sales services. 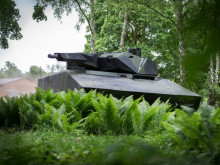 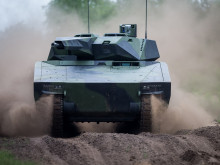 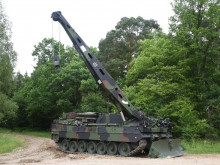 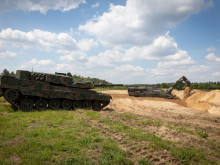